I was brought on to design and implement the live audiovisual part for a piece of verbatim musical theatre, London Road – only once ever performed before, with much less A/V, at the National Theatre in London. It featured multiple TV screens being rigged above the audience, showing different live TV stations and onstage cameras being used by actors in moving shots (each with different overlays and lower-thirds), a movable set with live projection mapping, and two scenes with live cameras (again used by actors) mixed and projected onto the scenery.

One Mac Mini with an external graphics card ran two 6K lumen VGA projectors, edge-blended together, using QLab; this was also equipped with a Blackmagic UltraStudio Extreme capture card to capture the live video and map this to the blended surface in real-time, and hosted all the content to be mapped to the set. Another Mac Mini outputted overlays, prerecorded VTs, and video/stills content for six TV screens on a Decklink Quad output card – with two outputs into an ATEM 1 M/E production switcher. The switcher took 5 camera inputs run over SDI to onstage cameras (some connected directly, others via HDMI to SDI battery converters). The eventual system was all run off a master QLab instance controlling other computers, via a Gigabit Ethernet network switch. Eventually, this controlled:
– the instance feeding overlays / VTs / screens (local)
– the projection mapping server (via OSC)
– a computer firing audio cues at the other end of the auditorium (via OSC)
– the vision mixer itself (via OSC) to control inbuilt media playback / keying / aux feeds for different screens
– fed audio to the QL5 mixing desk (via Dante on a VLAN)

The system ran flawlessly for 14 performances, with single-button operation on close to 100 live cues. 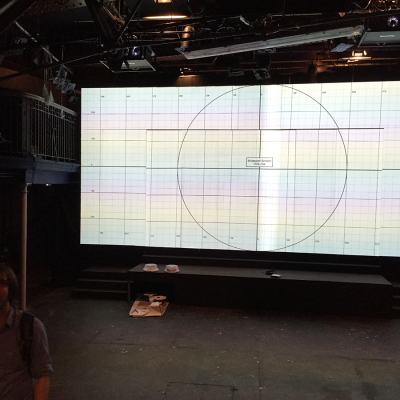 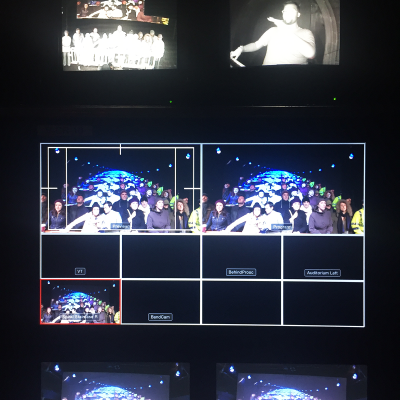 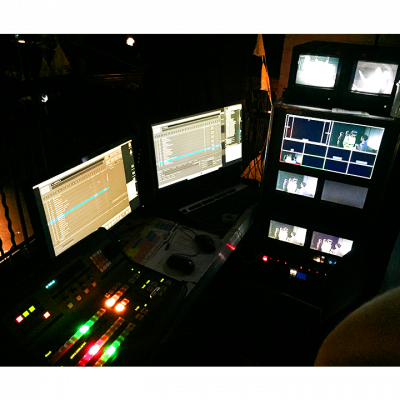