As part of my work at the CortexLab at UCL, we needed to develop a reproducible enclosure in which mice could be subjected to different visual or auditory stimuli (for example, as part of a virtual reality maze) while not being affected by the varying external environment. The box also needed to house three screens and a range of other experimental apparatus while maintaining a constant and homogeneous internal temperature.

After iterating over several designs, I chose to build a box made out of 36mm MDF with rebated joints to further minimize any sound leakage. Mice have a hearing range of approximately 2kHz to 100kHz, so low-frequency noise is much less of an issue than at human auditory frequencies. The boxes were also decoupled on sheets of rubber to avoid impact noise transfer.

For cooling, I originally prototyped a baffle box lined with open-cell foam and three ducted fans over a Peltier cooling element. This proved too cumbersome so the production boxes have a direct opening for an air-to-air Peltier cooling system. These are regulated by a controller and thermostat which performs PWM to maintain the optimal temperature. This was all built into an enclosure with a C14 IEC socket on the top and a neon switch.

The internal design features a removable attachment holding the mouse, screens and associated equipment, also decoupled on rubber pads; a 3D-printed holder for a set of high-frequency speakers (initially only the front 180 degrees are being used), with separate miniature amplifier modules housed outside the box and connected using shielded RJ45 connectors. The interior is also lined with 50mm thick contoured open-cell foam to reduce reflections and improve sound localisation above 2kHz.

All cables are routed in and out of the box via PVC pipe with at least three right-angle bends, capped with foam. This, together with a double rubber compression seal on the front door, provides a total acoustic attenuation of at least 40dB in the frequencies concerned. So far, over 10 boxes have been built and are in daily use. 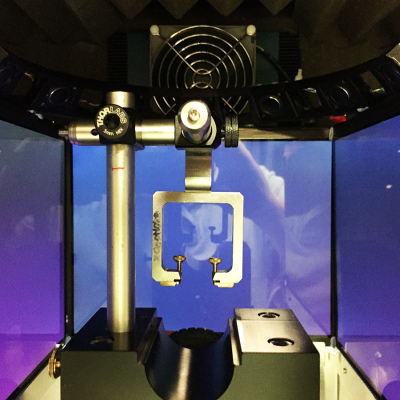