Imperial College had a multimillion-pound budget to redevelop a new Media Centre for use entirely by student societies with heavy space constraints. The challenge was to pack as much flexibility as possible into a maintainable and easy-to-use environment.

The requirement was to have a multi-purpose area used by different student societies. In total, we had to make room for: a broadcast radio studio (with at least 6 microphones): a broadcast/film studio and photography studio, an audio recording studio / broadcast studio and music practice room, a film darkroom, a postproduction/edit suite, newspaper production office, a multipurpose computer area, and storage.

I was responsible for setting out the layout of the rooms, the sizes and shapes needed, alongside all the cabling infrastructure (with a £40,000 budget specifically allocated to cabling), as well as installed equipment and movable equipment for outside broadcasts. A mixture of analog multicore, CAT6a and BNC cabling was routed through the facility, with audio runs to a control room patchbay to allow recording and patching of inputs and outputs from hundreds of different sources in different rooms.

Eventually, we chose an Avid S3L-X mixing system for the central audio component (since it was usable as a broadcast/live desk as well as a recording interface or control surface for editing). I chose the 32 input S3L-X system with two 16 input stage box interfaces that can be used remotely throughout the facility and linked back to the mixer via installed data cabling. The Pro Tools HD equipped edit suite uses an Avid Artist Control mixer and a Genelec 5.1 monitoring system.while its radio station features a Studer OnAir 1500 console. Genelec loudspeakers, a PreSonus digital mixing console, Yellowtec m!ka microphone stands and microphones by RØDE and Shure are also employed throughout the building. The video infrastructure utilises a selection of Blackmagic Design video equipment, and I chose a compact ElectroVoice PA system for the rehearsal and recording studio – with four ZLX12P usable as monitors or a front-of-house PA.

The Avid S3L-X mixing system is used in dual mode, as both a live sound console for TV audio during the day and as a Pro Tools HD audio post production mixer in the evening.

The TV studio operates in HD format using HD-SDI interconnections and employs extensive use of Blackmagic Design products supplied by HHB, including the VideoHub 72 router and the ATEM 1M/E video switcher. 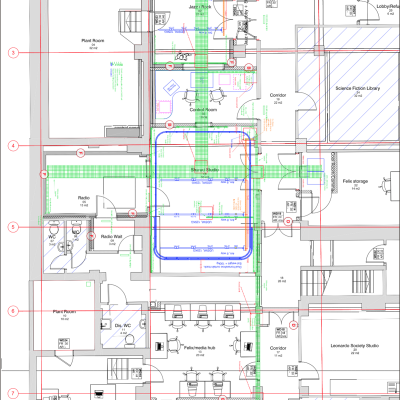 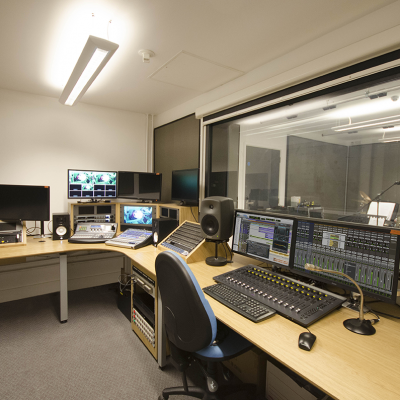 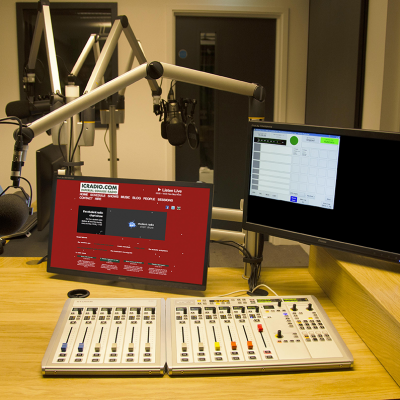